Chinese Passenger Must Pay $9,900 After Throwing Coins At Aircraft Engine 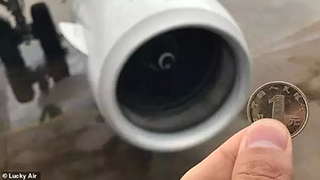 Many Chinese people believe that chucking coins at a specific target could bring them good luck. When the target is an aircraft engine it’s a very bad idea.

A passenger who did just that has been ordered to pay more than 50,000 yuan ($9,900) to Shenzen Airlines after throwing coins into a plane engine before takeoff.

The air traveller, known by his surname Li, tossed two small coins towards the engine from the stairs while boarding the domestic flight in central China.

His action caused the flight to be cancelled due to safety concerns and a large number of passengers to be stranded at the airport late at night, a court said. Bad luck for them.

The incident took place in July, 2017, at the Wuhan Tianhe International Airport, one of the busiest air hubs in central China.

Li claimed he was praying for a safe journey after being inspired by a conversation he had had with other people at the boarding area.

He threw two one jiao coins in the Chinese currency while walking up to the cabin at about 10:20pm. Other passengers reported his behaviour to the cabin crew.

The airline immediately arranged workers to look for the coins. They also cancelled the flight and organized a thorough safety check, while Li was detained at the airport by police.

Li was sued by the airline which claimed to sustain a financial loss of more than 70,000 yuan $14,000) due to his action. The Wuhan Intermediate People's Court ruled in airline's favour and demanded Li cover the entire bill in the first trial. Li appealed the decision. In a recent second trial, the payment was reduced.

It has been estimated that more than 70% of Chinese -- or more than one billion people -- have never flown in their life; therefore they are oblivious of the etiquette and safety regulations of travelling by air.

Just last week, two passengers were detained by police at Jinan Yaoqiang International Airport in eastern China after throwing coins at a plane operated by Lucky Air for good luck while boarding.


The domestic flight was delayed for two hours as a result, affecting 260 passengers.