No Nuts In The Loo: Allergic Pax Sits In QF Bathroom With A Face Mask 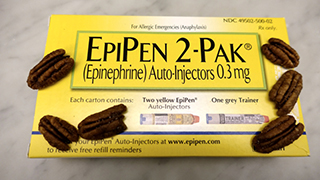 A passenger with a nut allergy on an international Qantas flight says she was made to sit in the bathroom and wear a face mask while cabin crew served nuts, putting her at risk of anaphylactic shock.

The woman, from England, was flying out to see her sister in Australia. She told the Sun she had told Qantas of her severe nut allergy months in advance and had documents to confirm nuts would not be served aboard.

She claims airline staff said they had no notes on her allergy, refused to make an announcement to passengers about her allergy and told her that complimentary almond slices would be served during the flight.

The Qantas website says that although all peanuts have been removed from flights, the airline “cannot guarantee an allergy-free environment.”

According to the Sun story, Qantas staff warned the woman not to board the Melbourne-bound flight, but when told that wasn’t an option, crew handed her a mask to wear instead.

She claims she spent the remainder of her flight sitting in the toilet to escape the nutty snacks being handed out by cabin crew.