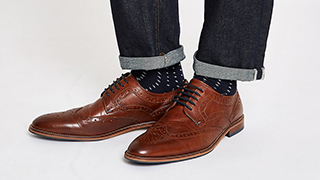 Completing an ultramarathon is never easy, but completing it in brogues is an even more astonishing “feet.”

Such was the challenge presented to New Zealand athlete Peter Messervy-Gross, who was forced to complete a 160-km race across a frozen lake in Mongolia wearing shiny dress shoes.

He had trained hard for the competition and invested considerable money in ensuring he had the right equipment for Mongolia’s extreme weather, only to land and find out that his luggage was MIA.

The airline misplaced his endurance kit and special footwear en route to Ulan Bator and, blessed with size 13 feet, he was unable to find replacement trainers that fit.

Clearly not one to give up, he did the entire race wearing his old office shoes – a pair of brogues -- and jeans, earning him the nickname “the rogue in brogues.”

Besides Messervy-Gross’ own resilience, his misfortune revealed the kindness of others who stepped up to help a fellow competitor.

“The generosity of the people on the trip was just phenomenal,” he told the BBC. “As soon as word got around that my kit really wasn't turning up, people kept coming up to me and offering various items that they felt they could spare.”

For four days, Messervy-Gross trekked on as temperatures dipped below 20C, walking more than 40km a day and, but ultimately finishing the ultramarathon – albeit with sore feet.

The airline did eventually deliver his luggage but unfortunately, it was too little too late -- he got it back 15 minutes before boarding his return flight.