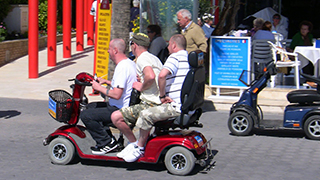 
The ban applies to residents as well as tourists, who have been criticized for using the vehicles to get around even if they don't physically need them.

The move is part of a crackdown on what has been dubbed 'uncivic tourism.' Barcelona and Madrid have already introduced similar legislation and other towns and resorts, including Majorca’s Palma are considering following suit.

Benidorm has also announced a clampdown on raunchy t-shirts and souvenirs in an attempt to tackle lewd behaviour and a drinking culture by tourists. Officers raided tourism stalls this week, seizing lighters with naked women on them, candy shaped like genitalia, and fake boobs, according to the Daily Mail.

People on mobility scooters regularly make an appearance in the UK TV show Benidorm, but they're much more prevalent in real life, with an increasing number of non-mobility-challenged tourists renting the vehicles to get around the resort more quickly, according to reports.

The move has had a mixed reaction from British tourists responding to the Mail report, with one reader saying: "Ban the scooters and boozy parties and Benidorm will be a ghost town," and another predicting: "They will have empty hotels to go with it."

Among those in favour, one reader described Benidorm as 'the mobility scooter capital of the world', and another said: "I could not believe how the scooters were abused when I visited Benidorm. People with perfect mobility were charging around on the scooters then parking up and walking into bars/shops!"