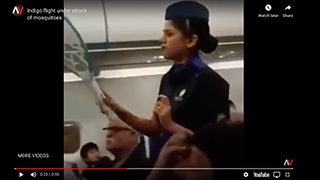 Mosquitos are annoying enough in a wide open field, but imagine being confined in a flying tube with them.

A passenger on an apparently mosquito-infested flight on India’s IndiGo shared a video of the Dhaka to Kolkata Indigo flight number 6E 1859 on Twitter where flight attendants can be seen swatting the bloodsuckers with an electrified mosquito racket as travellers use papers to fan the bugs away.

After this incident, the airline says it has taken appropriate measures by spraying the interior with approved insecticides and also placing mosquito-repellent patches in the aircraft.

However, these same measures were implemented after a similar event last year – when a Bengaluru-based doctor was thrown off the flight after complaining about mosquitos on the IndiGo plane – but the mosquito issue once again took place.


The airline says it also uses mosquito bats to dispatch the insects in exceptional circumstances.