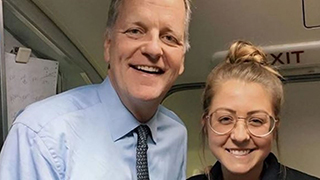 The four-year veteran of the airline says she has never spilled drinks on a passenger before. When she did this week, the errant beverage landed on – of all people – AA CEO Doug Parker.

NBC News reports that 28-year-old Peters and other crew members had been warned ahead of time that Parker would be on the flight.

"We knew he was going to be on board and had to be on our best behaviour," Peters said.

Peters was carrying beverages to those in first class, as others were still boarding. The pax in front of her suddenly stopped and moved backwards, which sent Peters’ tray flying. And, like a scene from a sitcom, a drink spilled across Parker.

"I wanted to drop dead right there," Peters wrote in an Instagram post about the incident.
Parker laughed the entire experience off.

“Luckily he was super cool, and a good sport about it. He later came back and we chatted for a little, and joked about it the rest of the flight,” Peters said on Instagram.