Trump Has Advice For Everyone From Boeing To French Firefighters 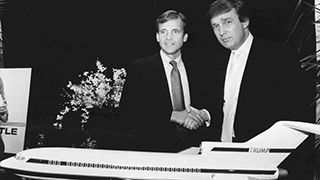 Donald Trump paid US$365 million to buy a profitable airline shuttle service from Eastern Air Lines. It was bankrupt in three years.

Trump tweeted Monday that if he were in charge of Boeing, he would "FIX" the plane, "add some additional great features, & REBRAND the plane with a new name." He adds: "No product has suffered like this one."

Trump, who has claimed in the past that he “knows tech better than anyone,” could conceivably fix the plane himself, but so far he is just offering advice. Previous aviation advice includes this tweet, made in the wake of the two Boeing 737 MAX crashes: “Airplanes are becoming far too complex to fly. Pilots are no longer needed, but rather computer scientists from MIT.”

Trump -- who brands his hotels, golf courses and buildings with his family name, would probably have some advice for Boeing on a new name for the aircraft. Perhaps not Trump Shuttle – he already owned an airline by that name which somehow went bankrupt. Maybe the MAXI-Trump?

Is the U.S. leader qualified as a branding expert as well as a tech genius? He’s not sure: "What the hell do I know about branding, maybe nothing (but I did become President!)," he tweeted.

Thanks for the reminder Mr. President.

That tweet earned an English-language response from French firefighters: “Hundreds of firemen of the Paris Fire Brigade are doing everything they can to bring the terrible #NotreDame fire under control. All means are being used, except for water-bombing aircrafts which, if used, could lead to the collapse of the entire structure of the cathedral.”