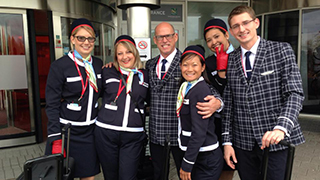 Norwegian Air has been accused of being stuck in the 50s after ordering female cabin crew to wear heels and makeup to work.

In a dress code circulated to staff, the budget airline said the heels must be at least two centimetres high. If women want an exception, they must obtain a doctor's note and update it every six months, said the memo.

"It is almost comical that we face these issues in 2019," Ingrid Hodnebo, a women's spokesperson for the country's Socialist Left Party, told Norwegian newspaper VG.

"While the rest of society has moved on, Norwegian is stuck in the Mad Men universe from the 1950s and 60s."

The document, seen by the newspaper, also orders female employees to wear eye makeup and light foundation, a tinted moisturizer, or powders. Men, meanwhile, are only allowed to wear makeup to cover up acne or bruises.

Women are only allowed to wear two rings per hand, and none on their thumbs, and any jewellery must be made from gold or silver-coloured metal. No necklaces are allowed and jewellery with religious motifs is banned.

"Norwegian's crew must follow the company's uniform policy," Norwegian spokesperson Astrid Mannion-Gibson told VG. "The uniform is neutral and discreet and yes, it does place different requirements on men and women when it comes to makeup, hair and so on. This is common among other airlines too."

She added: "We are a global airline which carries passengers from around the world with different cultures and religions on board. It is vital that our crew's appearance does not offend or provoke."

The Norwegian Labour Party's women's spokesperson Anette Trettebergstuen said: "Uniform requirements are one thing, but to impose heels and makeup is going too far. The year 1950 rang and it wants its rulebook back. This is super embarrassing and they should have progressed further."

Last month, British airline Virgin Atlantic announced that its cabin crew would no longer be obliged to wear makeup, although they can choose to do so. It is also issuing trousers to female crew as standard, whereas in the past they had to request them.

In announcing the change to its dress code, Virgin said: "Not only do the new guidelines offer an increased level of comfort, they also provide our team with more choice on how they want to express themselves at work. Helping people to be themselves is core to our desire to be the most loved travel company."