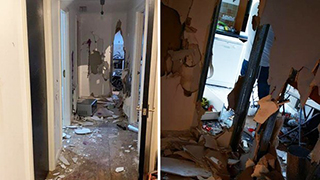 A 16-year-old girl has been arrested after friends she invited to an apartment rented via booking.com caused $70,000 of damage.

The guests allegedly tore down walls with sledgehammers at the luxury flat in Belfast, which had been booked by a woman for her teenage daughter for one night.

The booking rules clearly stated that parties and events were banned but the teenager invited people to the flat on Saturday night using the short messaging service Snapchat.

The owner of the apartment, who doesn't want to be named, told Belfast Live the extent of the destruction was 'unbelievable.'

"There is now a hole in the wall between the kitchen and hall because they used sledgehammers to break through.

"The windows have been smashed, doors broken, the kitchen and bathrooms are wrecked, everything is ruined."

Up to 40 youths are believed to have descended on the apartment, which is usually let for around $350 on Saturday nights. The owner said the repairs will costs around $70,000, but the girl's mother is believed to have paid a deposit of just $180.

'I've contacted Booking.com to report what happened and their solution was to waive the $17 commission fee which isn't going to be much help," said the owner. "I have no faith that I will get a penny back from those responsible."

He said he has also had to cancel 42 bookings and give refunds to potential customers.

"We were fully booked over Easter and it was heartbreaking having to cancel on people who were looking forward to their holidays and give full refunds, which is just extra money lost on top of the refurb costs," he added.

"The contractors have said the place should be ready again within a month but this has really put me off doing anything like this again."

A Booking.com spokesperson said: "We support our accommodation partners fully and will cooperate with law enforcement in their official investigation as necessary.

'In this instance, we have also taken additional precautions to block this customer from making any further reservations via our site."

Police said the girl has been released on bail pending further enquiries.