Owls & Airplanes: One Found In The Cockpit, Another Naps In The Engine 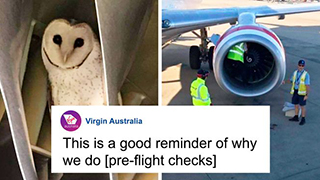 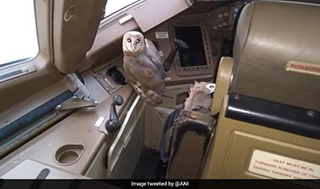 Virgin Australia staff got a shock last week when they found an owl sleeping inside a plane engine as they were performing pre-flight checks. Workers found the napping bird as the plane was being checked at MEL.

The airline posted photos to Twitter of the bird hidden in the engine after they found it, saying: “This owl didn’t give a hoot where it napped!”

Virgin Australia tweeted: “The cute little guy was found during our pre-flight checks which is a good reminder of why we do them.” Indeed, if that engine started, it would have been owl over. In more ways than one.

“Our team of engineers rescued it and it was checked out before being safely released back into the wild,” Virgin Australia added.

Owls seem to be attracted to airplanes. It was only back in February when flight engineers at BOM were greeted by a surprise visitor when they entered the cockpit of a Jet Airways Boeing 777 parked overnight.

Perched by the window beside the flight commander's seat, with its heart-shaped face, was a barn owl.

The airport officials retrieved the owl and later handed it over to the Mumbai airport's fire department, who released it. The owl did not make a fuss when the airline staff tried to get it out, and some excited staff even managed to click selfies with the nocturnal bird.

Officials said the owl may have entered the plane at night when one of its doors was open, hoping to find food. Hope it brought a credit card!