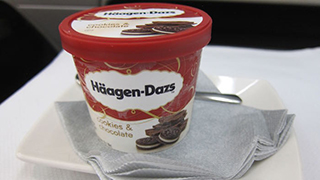 Six Cathay Pacific Airlines crew members have been placed under investigation after being caught red-handed pilfering from the airline.

Objects lifted include cutlery, bottles of alcohol and, the most popular item, small containers of Häagen-Dazs ice cream that are served in-flight.

South China Morning Post reports that several members of the cabin crew are known to have freezers at home packed with the ice cream.

The six employees caught, a mix of senior and junior crew members, were placed under investigation and face disciplinary action which could include termination.

Cathay started performing spot checks at the airport in January after the airline decided to crack down on petty theft.

“In view of an increasing number of reported losses of company property, we have informed our cabin crew that random inspections will be carried out,” a company spokeswoman told South China Morning Post. “We are dealing with cases in a fair and reasonable manner in accordance with standard internal procedure.”

Ed Higgs, general manager of in-flight services for the airline, said employees would be inspected by a security team upon leaving an aircraft “for any items that you may have in your possession when you have been or are on company property."