The Airport, A Treasure Trove Of Lost Objects 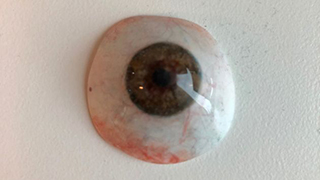 Sleepy, rushed and distracted travellers leave thousands of objects at airports all the time.

Belts, keys, sunglasses, cellphones, laptops, neck pillows and books are among the most common forgotten items, but some truly odd and valuable treasures also get left behind that just make us scratch our heads and ask, “How?”

Last month, a Saudi Arabian Airlines flight heading to Kuala Lumpur from Jeddah, Saudi Arabia had to make a U-turn after a mother realized she’d left her baby behind in the boarding gate area. Huh?

Then there’s the downright grotesque.

Portland International Airport reports a wide range of odd left-behind items, including a glass eye, which, according to PDX spokeswoman Kama Simonds, “has been in the lost and found for a few years.”

Last week over at ANC, authorities turned to social media to identify the owner of a plastic bag containing human ashes that was left at a security checkpoint back in AUG.

A lot of the time, airport customer service just wants to reunite passengers with their forgotten goods, and some will go beyond the call of duty to make sure that happens.

Earlier this year, the lost and found staff at DFW was able to reunite a St. Louis passenger with a valuable and sentimental piece of jewelry after calling Cartier customer service with the serial number on a found bracelet.

Some investigations take longer. It took SLC seven months to reunite the owner of a handmade quilt inside a floral box with a card reading “Charlene and Lark.”

Other forgotten valuables are rather mysterious, like the script of the yet-to-air season premiere of a popular TV show that ended the previous season with a cliffhanger, found at LAX. Officials won’t reveal the show, nor the plot.