You Can Sleep In A Giant Potato In Idaho 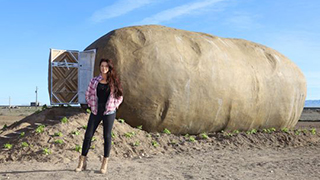 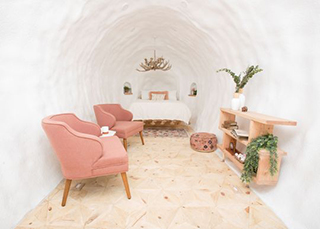 America’s top potato-producing state, Idaho, is taking its love of the spud to new heights, with a converted 28-foot long, 12-foot wide, 11½-foot tall potato accommodation. The Idaho Potato Commission – a marketing board that represents spud growers in Idaho -- took a giant steel-and-plaster potato on a tour across the U.S. to promote the virtues of the Idaho potato and now, it’s being repurposed into the Big Idaho Potato Hotel in a field southeast of Boise, the gem state's capital.

Kristie Wolfe, who had been a part of the big potato tour team and also is a tiny house builder, is turning the potato into an Airbnb rental with insulation, a wood floor, electricity and running water, as well as heating and air conditioning. She furnished it with a queen-size bed, two chairs, and an antler chandelier.

She also built a bathroom, which has a whirlpool, fireplace and skylight for stargazing.

The hotel is set to open in late May. The rate is US$200 a night, not including taxes.

USAToday had some interesting numbers to share about the Big Idaho Potato:

7,000: Years it would take to grow a potato that big
6: Number of tons it weighs
802: Number of times heavier than the largest potato ever grown
20,217: The number of servings of mashed potatoes it would make
1 million: Number of French Fries it would produce