A Factual Faux-Pas: Banff Is In Ontario, According to U.S. Network 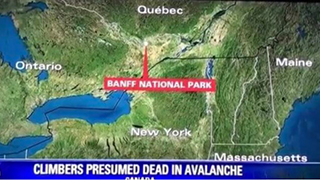 A U.S. television station has robbed Alberta of one of its most prized possessions, Banff National Park.

While reporting on the three mountain climbers who were killed in an avalanche on 18APR, KTVU, a Fox-owned station servicing California's Bay Area, showed Banff National Park incorrectly placed near Ottawa -- more than 3,000 kilometres away from its actual location in southern Alberta.

Huffington Post pointed out that Parks Canada's headquarters are located in Gatineau, Quebec, (just across the river from Ottawa), which might have been the cause for confusion.

While some people took to the Internet to shame the quality of U.S. television, others took on more humorous or wistful sentiments.

“Really regret not visiting Banff more often during my 3 years in Ottawa,” wrote Kamil Karamali, a reporter for Global News Toronto, on Twitter.

“I wish Banff was near Ottawa, I would be able to live in the mountains like I really want to,” wrote another user.