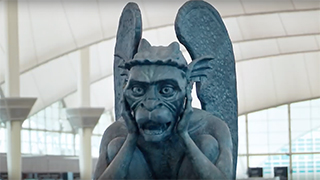 Denver International Airport, already known for being the subject of wild conspiracy theories, just got a little bit weirder.

USA Today reports that a new talking gargoyle, commissioned for the airport's 24th birthday, turned heads in a promotional video.

"What, you've never seen a talking gargoyle before?" the gargoyle asks a surprised patron. "Welcome to Illuminati Headquarters – I mean, Denver International Airport."

With the talking gargoyle, Denver airport seems to be leaning into its reputation as keeper of conspiracy theories. You name a wild rumor, someone has attached it to the airport, from evidence of aliens, to, yes, the Illuminati.

Conspiracy theories about DEN have abounded for more than two decades, owing to the airport’s mix of bold public art, unusual architecture, infamous construction problems and an internet-fueled cycle of self-feeding paranoia.

“We decided a few years ago that rather than fight all of this and try and convince everybody there’s nothing really going on, let’s have some fun with it," Heath Montgomery, then the airport's senior public information officer, told the Denver Post in 2016.

Why have a gargoyle in the airport?

"Oh, it's because of the conspiracy," one traveller mused in the gargoyle video.

" 'Oh, it's because of the conspiracy, I'm a little know-it-all!' " the animatronic gargoyle shot back. "Will you get back here? I have a question about this conspiracy."

When asked about his age, the gargoyle told another traveller he was 243 years old and still works out "all the time." "I look good for my age, don't I?" he asked. "You should see my squats."

Some thought the gimmick was hilarious, a few had their faces buried in phones and missed it altogether, while others just seemed baffled.

"You know, you can actually put the phone down and have a conversation with me," the gargoyle quipped at a young woman holding up her phone.