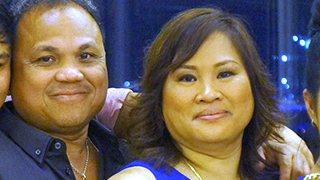 A bookkeeper working for Silversea Cruises has been accused of stealing $3.5 million from the ultra-luxury cruise company in an allegedly "deliberate and calculated fraud" said to have been perpetrated over four years in its Sydney, Australia office.

As part of her $88,000 employment package, Mary Ann Abellanoza received a free voyage each year on one of the company’s lavish vessels, which boast complimentary caviar and a 24-hour butler for each guest.

But the 53-year-old mother from Plumpton, in Sydney's west, has been charged with 98 fraud offences, including deliberately obtaining a financial advantage by deception and dealing with the proceeds of crime.

The court heard that, from 2014, while she was branch accounting supervisor, Abellanoza transferred $3.56 million into seven bank accounts under her control and used a downloadable generator to create fake invoices.

She came under suspicion in February 2018, when she told a senior executive she had fallen victim to an online scam and offered to reimburse the company. The cruise line’s vice-president of corporate accounting, Jose Santos, told the Supreme Court he thought the offer unusual because Abellanoza was not at fault.

Santos was informed by another employee that Abellanoza was seen "placing large quantities of hard copy documents in the shredding bin" in the days before she resigned in April 2018.

An investigation by a forensic accountant uncovered the alleged discrepancies, an expert telling the court that the size and frequency of the transactions was "indicative of a deliberate and calculated fraud."

Adding to the cruise company's pain, her husband then convinced a judge that, because he didn't know about it, the company could recover just under $2000 from him.

A judge accepted Perven Abellanoza’s version of events: that he believed his wife’s newfound wealth was "pure luck" after she developed a seven-days-a-week gambling habit. He told the court his wife had full control of the household finances, he was "hopeless with technology" and did "not know how to use an ATM." He was never allowed to gamble beside his wife, he told the court, because that was "bad luck."

The day after Silversea served Ms Abellanoza with a court summons, her husband was seen carrying two large cardboard boxes from his house and delivering them to a relative, before withdrawing $20,000 from his bank account.

Perven Abellanoza told the court the boxes contained clothes because he decided to move out when he discovered the allegations against his wife. The money was to pay her legal fees, he said.