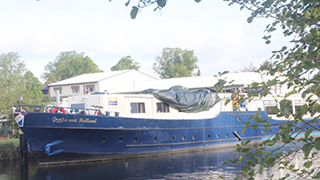 A Dutch-flagged river cruise ship suffered three separate mishaps, all of which resulted in structural damage, in a span of just seven days of sailing through the Müritz-Elde Waterway in Northern Germany.

The first incident to befall the 40 metre, 24 pax, 5 crew Gretha Van Holland was at 16:45 local time on 28APR, when its stern collided with a bridge pillar while the vessel was cruising in the waters of Rehberg. The damage was deemed slight and the vessel was allowed to continue on its voyage.

At 10:00 the following day, the vessel ran aground some 500 metres away from Hechtsforth Canal in Lauenberg, forcing local transport authorities to close the area off to traffic until the water level could be raised to enable refloating. Gretha Van Holland was once again on her way after four hours and numerous refloating attempts.

The last and most severe incident occurred at 18:20 on 4MAY, when the vessel’s wheelhouse struck a lock gate in Parchim. The impact demolished the wheelhouse and tore off the gate.

A local police official said the helmsman had failed to lower the hydraulic wheelhouse early enough as the vessel was passing through the canal.

Investigators have also found that Gretha Van Holland’s minimum draught was 1.4 metres whereas the Müritz-Elde Waterway in Lauenberg had a guaranteed depth of only 1.2 metres. It is believed that this resulted in the vessel's grounding.

Aside from pride and career prospects, there were no injuries in any of the incidents.