Woman Chooses Being Kicked Off Flight Over Listening To Safety Instructions 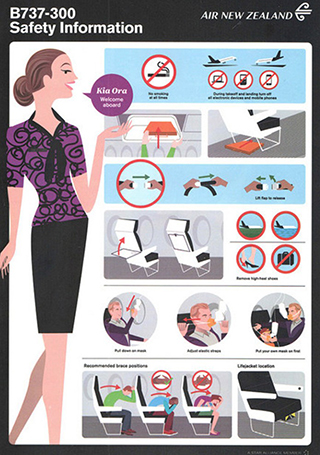 Not sure if you’ve noticed, but people can be quite odd.

Case in point: a woman seated in an exit row on an Air New Zealand flight who refused to watch the regulation air safety video or read the safety instructions card handed to her by flight attendants. The standoff eventually resulted in her being removed from the flight.

The woman, described by other passengers as “wealthy-looking,” was seated in the exit row that comes with extra legroom and extra responsibilities, but she blatantly ignored attendants’ attempts to get her to listen (for two minutes max) to the safety instructions.

One passenger told Stuff.co.nz: “The video started playing and the flight attendant held up the card, but the woman started looking down at her book.”

The witness said the woman, who was holding a Louis Vuitton bag, then picked up her phone while her male companion also continued to look at his device.

“A flight attendant said very patiently ‘Can you please watch what’s happening because this is the exit row?’” the witness said. “The flight attendant was super kind and kept asking her, but the woman put her fingers in her ears.” How adult!

With the couple’s behaviour beginning to delay the plane, other passengers implored them to pay attention but they reportedly continued to refuse.

“They didn’t seem to care,” the witness said.

The pilot was eventually forced to return to the gate, Air New Zealand said, because a passenger “failed to comply with crew instructions.”

“Police were waiting at the gate when the aircraft returned and the customer disembarked,” said a spokesperson for the airline.