DL To Workers: Why Pay Union Dues When You Can Buy Video Games? 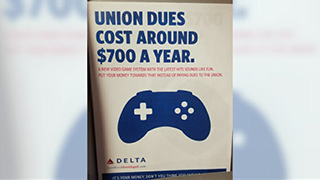 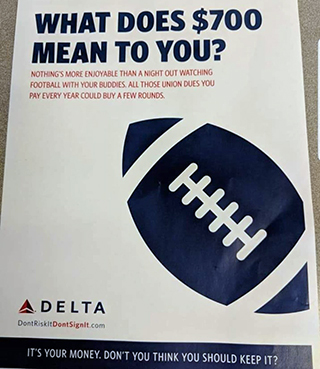 Two posters made by Delta Air Lines as part of an effort to dissuade thousands of its workers from joining a union drew a flood of criticism after they were posted on social media.

The posters included messages targeting the price of the dues company workers would be paying if the union formed.

“Union dues cost around $700 a year,” one noted. “A new video game system with the latest hits sounds like fun. Put your money towards that instead of paying dues to the union.”

The other, with a picture of a football, was framed similarly.

“What does $700 mean to you?” it said. “Nothing’s more enjoyable than a night out watching football with your buddies. All those union dues you pay every year could buy a few rounds.”

In the charged world of social media, the posters fell with a thud.

“You know what sounds fun @Delta,” Rick Smith, a liberal podcaster, tweeted: “Health care. A living wage. Dignity. Respect. A voice on the job. Safe working conditions. Retirement security. $700 Is a great investment once you look at all you benefit from.”

One of the most popular tweets of one of the posters was shared some 22,000 times.

Delta spokeswoman Lisa Hanna did not respond to a request to confirm the authenticity of the posters.

“Our employees have the best total compensation in the industry, including the most lucrative profit sharing program in the world,” said a statement she distributed. “They want and deserve the facts and we respect our employees’ right to decide if a union is right for them. Delta has shared many communications, which on the whole make clear that deciding whether or not to unionize should not be taken lightly.”

Carlson said the efforts to unionize the staff began in 2013, a few years after Delta had merged with Northwest, which resulted in the loss of union representation for Northwest’s ramp service, customer service and store workers. The IAM is currently in the process of collecting signed union cards from workers; support from 50% of the work group would authorize a vote on the union.