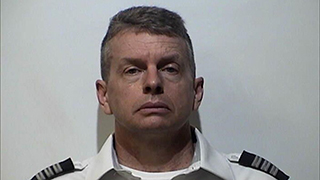 We’ve all experienced many reasons for a flight delay - from de-icing, to drunken passengers to equipment glitches. But having your pilot arrested for a triple murder was a new one for the passengers waiting to board a PSA Airlines flight out of Louisville, Kentucky.

The pilot for PSA  -- a subsidiary of American Airlines -- was arrested Saturday after he was charged in the 2015 deaths of a Kentucky couple and their neighbour, authorities said.

Christian Richard Martin, 51, was arrested on a plane loaded with pax preparing for takeoff to Charlotte, North Carolina.

John Kelly, a representative for the Phillips family, said the now-deceased Calvin Phillips was due to testify against Martin in a court case in 2015 when he and his wife were killed.

At the Louisville airport where Martin was arrested, pax expressed shock, according to CNN affiliate WDRB.

Ashley Martin – no relation to the accused -- and her mother, Frances Wise, were waiting to board the flight from Louisville to Charlotte when they heard their pilot had been arrested.

"It was like something you would totally see in a movie," Martin said.

"It was very tense," her mother told WDRB. "You could tell the employees knew something was going on."

The women assumed their pilot had been intoxicated - which in itself speaks volumes - and learned of the reason for his arrest later in the day.

A statement by AA affirmed the company’s assistance to law enforcement throughout the investigation and said, “All of us at American Airlines and PSA Airlines are deeply saddened to have learned about these allegations from 2015. Our team was made aware of the indictment this morning after his arrest at Louisville International Airport.”

The airline said Martin has been placed on administrative suspension pending the outcome of the investigation and court proceedings, which includes the suspension of all travel privileges.