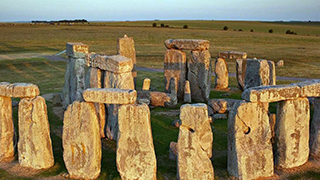 A Florida man had a pang of remorse and decided to return a large chunk of rock he stole from Stonehenge in Southwest England.Robert Phillips, of Aventura, Florida had kept hold of the nearly four feet long block of ancient stone for more than 60 years.He swiped it in 1958 while working for a diamond cutting firm which was contracted to help with repair work at the iconic stone circle, which dates back about 5,000 years.The company bored three holes into one of the standing stones so support rods could be placed inside. British-born Phillips then took one of these 'cores' as a souvenir.It wasn't until just before his 90th birthday he decided to own up and return the stone. By this time he lived in the U.S. for many years. Phillips' two sons brought the core back across the Atlantic and presented it to curator Heather Sebire of English Heritage, the agency that manages the Stonehenge site."The last thing we ever expected was to get a call from someone in America telling us they had a piece of Stonehenge," Sebire said.Lewis Phillips said his father was always aware of the 'huge importance' of the stone. "It was his wish that it be returned to Stonehenge. We are all delighted the core has come home," Lewis said.English Heritage called the stone 'incongruously pristine' as it had never been impacted by the weather and may be key in finally solving the mystery of where the stones really came from."Studying the Stonehenge core's 'DNA' could tell us more about where those enormous sarsen stones originated," Sebire said.