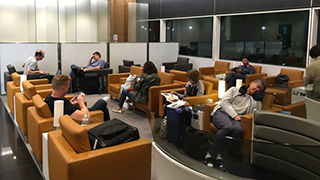 A Cathay Pacific customer travelling to Hong Kong collapsed and died in the bathroom of the airline's business lounge in San Francisco but wasn't discovered until 17 hours later.

The 69-year-old man, Ming Kou Chan, was seen on security video inside the CX first class lounge at SFO.

Footage showed him entering the bathroom but he never re-emerged.

He was eventually found unresponsive 17 hours and 20 minutes later, according to the recently released coroner's report. He was pronounced dead at the scene. A coroner’s report said Chan died of heart failure due to clogged arteries.

It is unclear why the airline did not conduct a search after Chan failed to board the flight and it has not explained why he laid there undiscovered for so long. Normally it would be expected that a public bathroom would be cleaned and/or inspected several times over a 17-hour period.

"Out of respect for the parties involved, we will not be commenting on the specifics of the incident," a Cathay statement said.

"From the airport's perspective we typically leave it up to the airlines to manage the situation whenever passengers don't actually board the flight," Malcolm Yeung of the airport commission added.

Hanna - May 22, 2019 @ 11:34
Why am I not shocked that a bathroom was not cleaned for 17 hrs?
but if it was different staff going in each time, no one may have noticed that it was still the same pair of shoes under the door. So sad for the man and his family. It could easily happen to any one of us travelling solo.