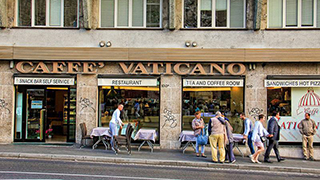 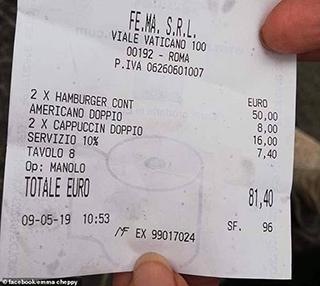 They call them tourist traps for a reason.

A photo of a meal receipt taken in Rome by a traveller from New York City has gone viral for its outlandishly expensive charges.

While dining at Caffe Vaticano, located near the Vatican, Emma Cheppy ordered two hamburgers, two cappuccinos and one Americano. Upon being presented with the receipt, she was shocked to see a total charge of $120.

Not believing her eyes, Cheppy snapped a pic of the receipt and posted it on Facebook to warn other tourists when visiting the Italian capital.

“VISITORS OF ROME BEWARE,” she wrote. “#CaffeVaticano has been ripping off tourists for ages apparently. No clue how they’re still getting away with their pricing.”

Cheppy also noted that the restaurant does not have a menu posted, failing to provide customers with actual prices. A seasoned traveller likely wouldn’t order under those circumstances, as these stories emerge year after year, but still…

Cheppy’s post prompted countless critics to post negative reviews of the restaurant on TripAdvisor, where it has a dismal 1.5-star rating.

TripAdvisor was forced to temporarily disable comments on Caffe Vaticano’s page because many of the comments violated TripAdvisor’s review posting policy – in other words they were too nasty to print.