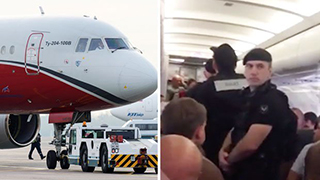 We try not to run too many stories about passengers running amok on planes. There are just too many of them, and since most of them reflect mental illness or addiction, they’re often just sad. But sometimes they’re just too strange to resist.

Police in Russia are investigating a bizarre and disturbing in-flight incident in which an unnamed 32-year-old man suddenly died after allegedly attempting to throttle a female passenger.

The incident began when the man threatened passengers on the flight by yelling: “If you want to live, put up your hands. We are going to die – the pilots are asleep!”

The flight, an Airbus A320 operated by Russian airline Red Wings, was headed from Moscow to Simferopol, a popular Black Sea resort area in Crimea.

Just over half an hour into the flight, the pilot turned back to Moscow for an emergency landing because a violent ruckus had broken out aboard, Britain’s Daily Mirror reported.

Reports say the man was screaming abuse, fighting men trying to restrain him and using a mobile phone to repeatedly clobber a male passenger over the head. He then attacked a woman, attempting to strangle her, until crew came to the rescue and lashed the man to a seat, a witness said.

Then things got even stranger. According to the Mirror, the attacker suddenly had a heart attack and collapsed. A doctor on the flight managed to restart the man’s heart but he was pronounced dead by paramedics shortly after landing.

Footage shot aboard includes audio of a man shouting in Russian “throw him out with a parachute!” and a woman saying “A man just started going mad here. He has been hitting a woman. They have tied him up now.”