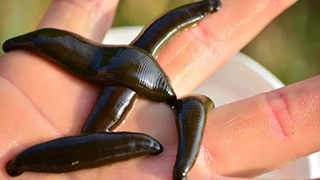 How would you feel if you found out your seat partner in 15A had 5,000 blood-sucking parasites stuffed in their carry-on suitcase?

Sometimes, it's better to not know.

Last OCT, Ippolit Bodounov, a Niagara Falls man travelling from Russia to YYZ, was caught with 4,788 live, wild leeches in his carry-on luggage. (Someone counted?)

According to a statement from the government agency Environment and Climate Change Canada, an enforcement officer detained the leeches to identify the species and determine if the import was lawful.

USA Today reports that Bodounov claimed he was using the leeches to fertilize his orchids with their "waste water," although their quantity suggests they were intended to sell.

Working in partnership with the Royal Ontario Museum, the agency identified the leeches as Hirudo verbana, one of only two species of medicinal leech that are subject to regulations aimed at controlling wildlife trade.

Bodounov had not obtained a permit to import medicinal leeches and on 24MAY was fined CAD$15,000 for the unlawful import of a regulated species.

Hanna - May 29, 2019 @ 16:25
They use leeches in spas to 'refresh' the faces of those who think they may need to look younger. He was probably importing them to sell to Russian spa owners.