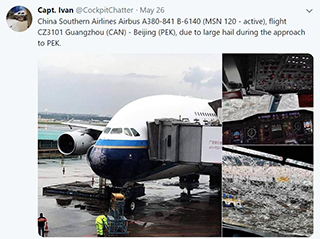 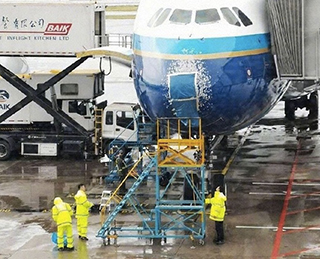 Aircraft are built to withstand pretty severe weather conditions, but a China Southern Airlines Airbus A380-800 wasn't able to take on a strong hail storm as balls of ice cracked the windshield and dented the aircraft’s nose – all this while it was airborne.

The China Southern plane was flying domestically from Guangzhou to Beijing and was cruising at about 37,000 feet in central China when it ran into a hailstorm.

As the cockpit windshield cracked under the onslaught of hail, the crew performed a rapid descent to 16,700 feet and continued to Beijing for a safe landing about 90 minutes later.

A photo by @CockpitChatter on Twitter shows the plane's cockpit window completely cracked and a pattern resembling a shotgun blast appears on the nose.

On the ground, the aircraft was checked thoroughly by engineers prior to repairs being carried out. A protective covering, much like a Band-Aid, was applied to the plane’s hail-damaged nose.