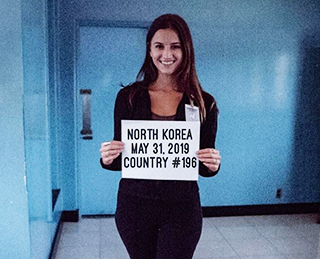 21-year-old Lexi Alford claims to have become the youngest person to visit every country when she stepped foot in North Korea on 31MAY.

Some travellers love to return to their favourite destinations time and time again, but others make an effort to discover a new place each time, like a 21-year-old American woman who claims she is now the youngest person to have visited every country in the world.

For Lexie Alford, the drive is two-fold --  discovering other people's ways of life all around the world, and claiming the "Youngest person to travel to all sovereign countries (overall)" title in the Guinness World Records.

Alford is aiming to beat out the current Guinness World Records holder James Asquith, who was 24 years old when he finished visiting every country in 2013.

She says 31MAY marked her world-wide globe-trotting milestone when she set foot in North Korea, the 196th sovereign nation on her list.

Alford tracked her journey on social media, sharing her crusade with thousand of subscribers (she now has just under 100,000 followers on Instagram).

"OFFICIALLY TRAVELED TO EVERY COUNTRY IN THE WORLD," she wrote in a photo caption where she's holding a sign reading 'North Korea, May 31, 2019, Country #196.

"It’s crazy to have years of hard work culminate into one single moment," she went on. "I’m so grateful to everyone that’s helped me get here. The greatest chapter of my life is coming to a close. Cheers to a new beginning."

In an interview with Forbes, Alford said her love for travel began at a young age thanks to her family owning a travel agency in California.

"My parents would take me out of school and place me on independent study for weeks and months at a time every year," she said. "My parents placed a lot of importance on exposing me to every way of life around the world, and that had a very profound impact on the person I am today. I've always had a curiosity about other people's ways of life and how they find happiness."

In order to claim the title, "Youngest person to travel to all sovereign countries (overall)" in the Guinness World Records, Alford has to submit nearly 10,000 pieces of evidence of her travels in chronological order.

A Guinness World Records spokesperson has confirmed that Alford has submitted an application for the title, and that her submission is under review.

Now that she's completed this massive life goal, the young traveller says she is writing a book about her adventures and is going to start public speaking – right after she takes a well-deserved rest from her jet set adventures.