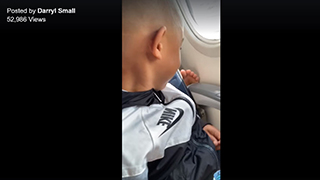 Kids say the darndest things, that's for sure, calling a spade a spade in situations where adults are often too polite, shy or embarrassed to speak up.

If we haven't been there ourselves, we've heard the horror stories and seen the photo evidence on social media where passengers are alarmed at a foreign body sharing their armrest space as the passenger behind them rests their foot on the arm.

One four-year-old boy flying from Houston to Florida wasn't having it.

In a video shared by his father Darryl on Facebook, the boy is heard saying, "There are stinky feet behind me." He then looks at the foot before peering round at the culprit, saying in shock: "It's a lady!"

As his father barely restrains his laughter, the boy turns around and calls out the female passenger for putting her feet on his seat and Darryl says that the woman apologized and moved her bare feet.

"As a child he knew that putting your foot in someone else’s space was not kind at all," said Darryl in an interview with Unilad. "Sometimes adults hold back with confronting others to keep the peace but as a child he voiced his concerns and his facial expressions and reaction made it hilarious."

The video has since been shared over 700 times, with social media users firmly siding with the boy.