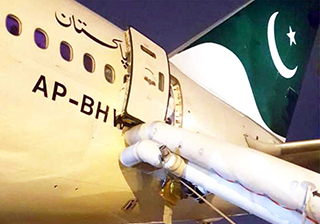 You’re inside a large metal tube. There are doors on the sides of the tube. Where do you think they lead? If you answer ‘the toilet,’ you’re wrong.

However, a female passenger aboard a Pakistan International Airlines (PIA) flight caused panic yesterday when she accidentally mistook the emergency exit door for the toilet.

The plane was still on the ground – that’s the only reason the door would open as pressurization prevents the door from being opened during flight – but opening the door caused the aircraft’s emergency chute to deploy, resulting in a seven-hour flight delay.

According to the Times of Islamabad, the Boeing 777 aircraft was on the runway at Manchester Airport in the northwest of England when a woman seated at the rear of the plane got up from her seat to use the toilet.

The delay was exacerbated due to crew needing to reseat 21 of the 393 passengers and offload 35, because the rear exit door was no longer available for use in the event of an emergency.