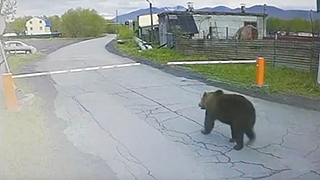 Here's one fellow passenger you probably wouldn't want to be seated beside on a flight.

Air travellers were put on alert at a Russian airport after a large brown bear marched straight through a security checkpoint.

Yelizovo Airport, located in the town of Petropavlovsk-Kamchatsky, is the main gateway to the Kamchatka peninsula in Russia's Far East, a remote region famous for the abundance and size of its brown bear population.

In this case, a curious brown bear decided to go on an early morning walk to the city airport, wandering right through the personal access gate, startling security and causing the airport to go into lockdown.

The intrusion was captured by CCTV footage and shared by the Siberian Times.

Passengers who were waiting to enter the airport for a full flight to Moscow were told to stay away from the creature. Security locked the main terminal building (which is rather small) and flights were delayed until armed animal rangers could arrive to deal with the situation.

Ironically, SimpleFlying reports that the rangers have not been able to locate or capture the bear. The bear was spotted meandering between hangars and the runway, but then vanished.

Thousands of bears roam the volcano-and-glacier landscape of the Kamchatka Peninsula. This summer season, two people have been killed by brown bears in separate incidents