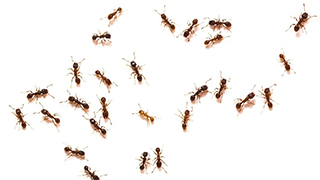 A nine-hour, transcontinental United Airlines flight was hit with "ant-mageddon" as these tiny anthropods spilled out of a passenger's suitcase, biting other fellow flyers.

That is the situation described by Charlotte Burns, who was on the flight from Venice to Newark.

Burns said she first noticed the "fat little bugs" -- which she described as being larger than the common carpenter ant -- between the seats as the plane was taxiing in Venice. Other passengers started noticing the ants too and by the time they were up in the air, they seemed to be spreading out more and more.

While she was sent to the back of the plane, cabin crew inspected and wiped down her seat, but the ants kept reappearing.

Burns said the flight crew eventually discovered that a bag in the overhead compartment seemed to be ground zero for the infestation.

"The guy in front pulls down his case and ants spill out, running in every which direction," Burns told Gothamist on Twitter while she was still in-flight. "This is absolutely heeby-jeeby-goose-bumpy-get-me-a-gin-gross."

Several hours into the flight, Burns said her fellow passengers were "just carrying on as normal: there are no spare seats so, on a nine hour flight, at some point you just have to settle in."

United Airlines has already released a statement saying they were aware of the situation and planning to take the plane out of service after it landed: "We are concerned by the experience our customer reported on United flight 169 from Venice to Newark. We have been in contact with the crew and they have advised the ants have been isolated from a customer’s bag and the affected areas have been wiped down. At this time, the aircraft will continue to its final destination."