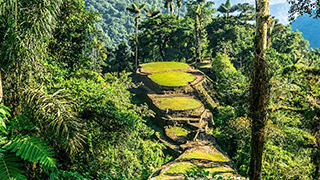 Deep in the jungle of the Sierra Nevada de Santa Marta mountains in Colombia sits Ciudad Perdida, the "Lost City."

Although built by the Tairona people more than 1,000 years ago, the site was only discovered in the 1970s.

Originally named Teyuna by the Tairona people, but dubbed "Ciudad Perdida" -- "Lost City" in Spanish -- upon rediscovery, it's often compared to Machu Picchu as both are archaeological sites perched on hilltops tucked into South American rainforests.

However, the Lost City is more than 600 years older and, unlike its Peruvian counterpart, there are no trains or buses allowing for easy travels to reach its ruins.

The only way to see it is on foot: a grueling multi day hike.

For centuries, the remoteness of the site kept it hidden. That is, until 1972, when looters pulled back the overgrowth to find treasures of gold, jewelry and ceramics.

After years of pillaging, the Colombian government took steps to protect the archaeological site and helped reconstruct the ancient city.

Visitors to the Lost City must be accompanied by a licensed guide, which can be booked online through a handful of companies.

The final stretch of the journey involves climbing 1,200 stone steps built by the Tairona.

But it's a challenge with a rewarding view at the top, when travellers can finally rest their eyes on Ciudad Perdida, a historic site where roughly 2,000 Taironas lived for centuries until they abandoned it sometime between 1580 and 1650, around the time of the Spanish colonization.