Rabbit Poo May Be Answer To Sustainable Flying 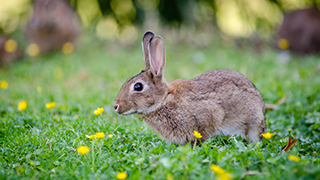 Of all the plants and living matter being considered for biofuel, rabbit poop might be the secret ingredient to creating a more sustainable airline industry.

Japanese carrier All Nippon Airways (ANA) has partnered with biotech start-up LanzaTech to introduce a greener (or browner, as the case may be) fuel choice by 2021 that uses recycled emissions, such as from steel plants, which are then converted into ethanol using enzymes found in the poo of rabbits.

This would then be converted into aviation fuel to be used on commercial flights.

The new sustainable fuel would be combined with the current fossil fuels used on a 50:50 ratio.

With a test run scheduled for this autumn, the airline hopes the new fuel can officially be rolled out by 2021.

"Adopting this advanced fuel will allow us to reduce CO2 emissions and meet the ambitious sustainable development goals that we have set for the airline," said Akihiko Miura, executive vice president for ANA, in a statement.

Despite IATA claiming that air travel only accounted for 2% of man-made CO2 emissions in 2017, many believe this is higher, with more people estimated to be flying in 2036 than are alive today, and airlines are becoming increasingly mindful of their emissions and sustainability efforts as they face public backlash about the carbon pollution caused by the aviation industry.

Earlier this year, KLM announced plans for a new 314-pax 'Flying-V' plane which uses 20% less fuel than the Airbus A350-900, while France and the Netherlands are calling for a new tax on European flights.

Further, NASA is working on all-electric planes powered by hydrogen fuel which reacts with oxygen to create energy and steam.