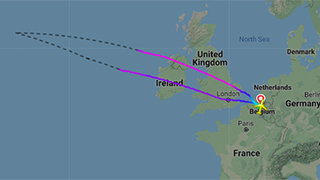 A Brussels Airlines Airbus A330 spent nine hours in the air flying from Brussels to Brussels on Saturday.

The aircraft was on its way to Washington when it had to turn back in the middle of the Atlantic. The reason for the ‘flightus interruptus’: a paperwork error.

A Brussels Airlines employee told SimpleFlying that the wrong aircraft was assigned to the flight.

The aircraft in question has only just been transferred to Brussels Airlines from sister airline Eurowings and as such, still sported Eurowings livery despite belonging to the Belgian flag carrier.

SimpleFlying reports that in such cases when an aircraft changes hands in such a manner, there is a mountain of paperwork to complete, which includes obtaining permission to operate the aircraft in the U.S. Some countries are just sticky about those things.

Brussels Airlines says it is now repainting the aircraft into its colours, and is completing the paperwork that will allow U.S. operations.

One Mile At A Time points out that this mistake will cost Brussels Airlines dearly – an estimated 500,000 Euros (CAD$750,000). In addition to the wasted fuel, the carrier is liable for mandatory compensation for delays under the European Union's EU261 policy.