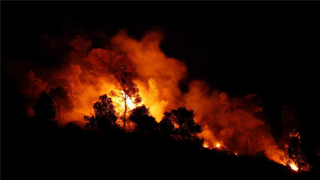 Poop is making headlines in more ways than one in travel lately. The latest is the unfortunate result of record heat waves in Europe.

How hot is it?

It’s so hot that in Spain, manure self-ignited, sparking a 10,000-acre wildfire.

(We know what you’re thinking: That’s some hot s**t. But we can’t print that.)

Authorities said the blaze – near Tarragona in the country's northeast -- likely sparked when an "improperly managed" pile of manure spontaneously self-combusted in the intense heat.

As of early afternoon, the fire was still not under control as 350 fire crew, 12 fire engines, seven aircraft, two hydroplanes and other heavy machinery fight to control the blaze.

Firefighters said the flare is one of the worst in Catalonia in the last 20 years, and warned it could spread to as much as two times its current area because of the intense heat and hilly terrain.

Europe has been struggling with a major heatwave this week, with Germany, Poland and the Czech Republic all recording their highest-ever June temperatures on Wednesday. France issued a "red level" alert for some regions in the south, the first time this level of alert has been used for a heatwave.

Climate scientists have warned that climate change is causing heat waves like this one to be increasingly frequent and severe. Météo-France said the frequency of such events is expected to double by 2050.