Bugged Out: TS Flight Grounded After Beetles Drop From Ceiling 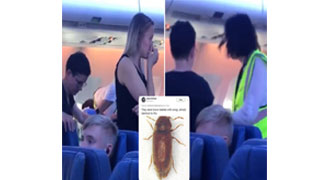 A “mystery infestation of bugs” on an Air Transat flight from the UK to Canada left passengers scrambling after beetle-like creatures began dropping from the ceiling.

Travellers on the TS flight from LGW to YVR had to disembark due to the issue, which set their travel plans back 24 hours on 26JUN.

Passengers reported seeing the insects scurrying down the aisle and falling from the overhead compartment just as the flight was set to take off.

Footage uploaded to Twitter by one passenger showed others squeezing out of their seats to make room for flight staff wearing fluorescent yellow vests and gloves.

Flight attendants reportedly told passengers to squash the bugs if they saw them.

“A bug fell right down by my seat and another landed in the lap of the man next to me. The flight attendant told him to squash it. It was disgusting,” Jenna Sullivan told Mail Online.

She said the bugs mainly appeared to be at the back of the plane, but some said they saw them running down the aisle.

Another passenger tweeted that insecticide was being sprayed at the bugs “amongst the passengers.”

The airline arranged accommodations for passengers overnight and boarded them on a flight the following day.

In response to one man’s tweet, Air Transat described the incident as a “minor issue.”

“It is a minor issue but as our passenger's safety is our priority we take it very seriously and are investigating to make sure everything is settled before you can board again.”