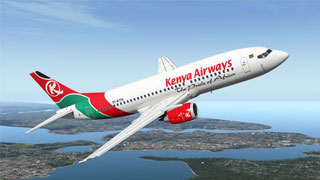 A Londoner, sunbathing in his garden last Sunday on a hot summer afternoon, narrowly missed being struck by a frozen corpse which tumbled out of the landing gear of an airliner and landed just a metre away from him.

Police were called to the South London suburb of Clapham after residents discovered the dead body in their back garden. It was later found to be that of a stowaway who fell from a Kenya Airways plane as it came in to land.

Kenya Airways confirmed that the body fell from the landing gear of a flight from Nairobi to Heathrow, the Guardian reported.

A next-door neighbour related how the dead man landed just a metre from a resident who was sunbathing in his garden.

“I heard a ‘whomp,’” the neighbour said. “I went upstairs to look out of a window.

“At first I thought it was a tramp asleep in the garden. He had all his clothes on and everything. I had a closer look and saw there was blood all over the walls of the garden … I realized immediately that he had fallen.”

A plane spotter who had followed the flight on an app saw the body fall, the report said. Police raced to the scene.

If the corpse had fallen two seconds earlier it would have landed on Clapham Common, thronged with hundreds of people enjoying a sunny Sunday.

According to shocked witnesses, the body was intact because it was frozen solid. The temperature at aircraft cruising altitude can fall below minus 50 C.

As Peter Needham reports for eGlobal Travel Media, nobody has yet been killed by a body falling from an aircraft, but such events happen more often than many people realize. The speed of a falling body, given the approach speed of an aircraft and the terminal velocity of a body in freefall, could approach 300 knots, exceeding 500 km/h.

Kenya Airways said in a statement that the aircraft had been inspected and that no damage had been reported.

“It is unfortunate that a person has lost his life by stowing aboard one of our aircraft and we express our condolences.”

Sadly, aircraft stowaways are nothing new, and almost all die. They’re almost always young men seeking a better life in more developed country. A few survive in wheel wells or cargo holds, if the flight is not long and the plane does not climb too high.