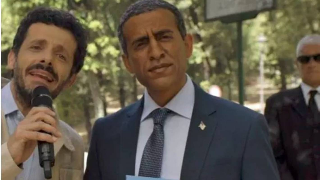 Alitalia might want to say ‘arrivederci’ to its ad agency.

The Italian airline has withdrawn a video advertisement with an actor playing former U.S. president Barack Obama in blackface after it came under heavy criticism on social media.

Who would have seen that coming?

Entitled "Where is Washington Mr. Obama?" the video was one of four designed to promote Alitalia's new nonstop service from Rome to the U.S. capital, the New York Times reported. The others featured actors playing President Trump, George Washington and Abraham Lincoln.

The video featuring the Obama character quickly prompted a backlash on YouTube and Facebook from commenters writing mostly in Italian.

Commenters called the video "outrageous" and noted that blackface was "universally considered a racist practice."

An airline representative initially defended the video, saying the actor portraying Obama was not Caucasian and that his makeup was intended to "highlight features."

However, the company has since apologized and said it would remove the video from all social media platforms.

"Alitalia deeply apologizes for the offence caused by a promotional video on our new Washington route," it said in a statement. "For our company, respect for everyone is mandatory, it was never our intention to hurt anyone and we will learn from what has happened."