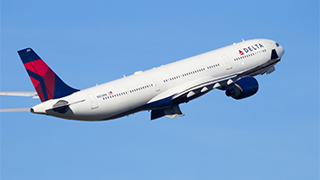 It was a memorable flight – no sooner was the plane airborne than a passenger shouted "I am God!" and strode down the aisle, trying to force his way into the cockpit while announcing loudly that he had come to save the world.

"I came to save the world, and I'm going to end terrorism!" the man yelled in the incident yesterday.

Passengers did not believe him. Neither did cabin crew. They joined forces to tackle the would-be messiah, as the pilot quickly turned Delta flight 579 back to San Juan, Puerto Rico.

The flight, operated with a B737-900ER aircraft, had been heading for New York JFK.

When Puerto Rican police arrested the disruptive passenger, they found his boarding pass did not say God but instead identified him as a man called Carlos Ramirez. The FBI then arrived to take over the investigation.

The man's outburst and the commotion it caused greatly upset and frightened passengers, angering some and bringing others to tears, the New York Post reported.

Police issued a statement saying the suspect, aged 30, "was aggressive and shouted 'I am God! San Juan is going to disappear tomorrow. I came to save the world and I am going to end terrorism,' and he also tried to enter the main cabin."

Delta assured passengers that the cockpit door remained closed and secured throughout the incident. The airline credited passengers with helping to subdue the unruly man.

"Delta applauds the quick action and professionalism of the crew of Delta flight 579," the airline said. "The flight attendant crew swiftly restrained the individual with help from some customers."

The New York Post said three flight attendants had confronted the man and told him to sit down. The man had replied sternly that he was God and he was preventing a catastrophe on the plane. He then tried to wrench open the cockpit door before he was brought to the ground and restrained.

"I thought it was a terrorist attack," a passenger told the Post. "I always think the worst when something like this happens in a plane after 9/11."

The flight arrived safely at JFK two hours late, minus 'God,' who was detained back in Puerto Rico.