Planes Brake For Turtles – Slow Ones & Fast Ones 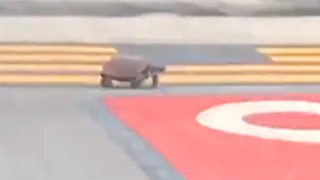 “Little buddy is hauling it.”

A Jetstar Airways flight was delayed last week while the pilot waited for a small turtle to cross the tarmac. Suffice it to say, he took things slow and steady. But in another incident in Fort Lauderdale, a pilot steered around a large turtle going at a remarkable clip.

A flight from Australia's Gold Coast to Adelaide was delayed for four minutes last week after First Officer James Fuller noticed a turtle on the tarmac, where his plane had just begun taxiing for departure.

"They aren’t the fastest-moving creatures," he told USA TODAY in a statement. "I’ve seen rabbits on the runway before, but in my four years flying with Jetstar, I’ve never seen a turtle on the tarmac. I want to thank customers for their patience while we gave the little fella right of way."

The captain alerted ATC and the turtle was able to return to a less-bustling habitat.

"Wanted to give a shout-out to our flight crew ... who brought the plane to a stop for a few minutes while taxiing at OOL to allow a gorgeous little turtle to cross the taxiway in front of the aircraft and make his way (yes, slowly – give him a break ... It's a turtle!) to the creek near the airport fence," passenger Lachlan Burnet wrote on the airline's Facebook page.

"Made mine and the other passengers' day to see that. Lovely stuff, JQ pilots! Well played."

Pilot David Serpa Endara had a different experience when he was taking off last Saturday from Fort Lauderdale Executive Airport and something caught his eye.

It was a pretty large turtle, moving at considerable speed for such an animal, across the tarmac.

The turtle was directly in Endara’s path as you can see on this video.

“I was about to take off,” he told the Miami Herald. “Then I saw it. I couldn’t believe how fast it was moving.” Endara managed to avoid the turtle as he was piloting his single-engine plane, and the critter made its way safely across.

“I’ve seen turtles out there ... before,” said the Fort Lauderdale resident, “but never one that got on the runway like that. And never one that fast.”

Commenters who watched the video had reactions including: “Little buddy is hauling!” “Fastest turtle I’ve ever seen.” And: “That turtle is on steroids!!!”