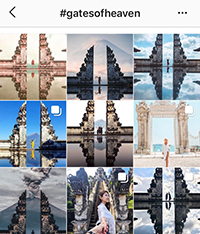 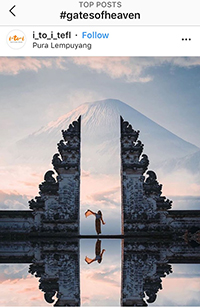 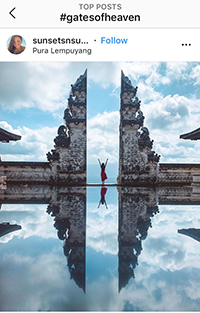 We're all guilty of going overboard with a photo filter every now and then. But a Bali destination popular with Instagram influencers shows that some photos on social media are nothing more than – quite literally – smoke and mirrors.

If you search for the hashtag #GatesofHeaven on Instagram, you will find more than 15,000 photos of the Pura Lempuyang Luhur complex in Bali, Indonesia, many of them showing a nearly identical scene: people standing between two massive stone monoliths reflected in crystal-clear water underneath.

Turns out, not all that glitters is gold.

It was a shocking revelation to Polina Marinova, an editor at Fortune magazine who visited the temple during a recent trip to Bali, to find out that there is no body of water at the base of the stone monoliths -- it is actually an illusion created by a photographer who sits under an umbrella and holds a mirror underneath an iPhone to create the reflection, an effect that can be purchased with a $1 or $2 donation.

"There is a long winding line on the side, and hundreds of people are watching you pose at the Gates of Heaven," she said. "Most, if not all, the people in the line were tourists, and there were definitely people who had prepared for this moment. Some did yoga poses, others jumped in the air, and on several occasions, people did a redo because they didn't like how their pictures came out. I mean, it was over the top."

And some people didn't stop there – some photos display imposing mountains in the distance, also a complete fabrication.

Sadly, when Marinova asked her guide about the history of the temple, he told her that almost no one who comes to visit wants to know about Pura Lempuyang Luhur — they just want a photo in front of it.

"That's really disappointing because the Lempuyang Temple is one of Bali's oldest and most highly regarded temples," she said. "So to see so many people waiting hours to take their photo rather than walking around the grounds of the temple says a lot about what we value in 2019."