Pax Hops On Luggage Conveyor Belt, Thinking It Will Take Her To The Plane 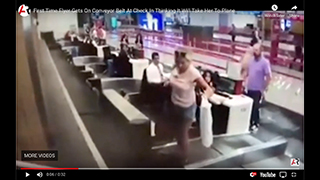 If only it were that simple: a first-time flyer thought the conveyor belt at check-in was there to take her to the plane.

Surveillance cameras at the recently opened Istanbul Airport in Turkey show a woman stepping on to the luggage conveyor belt, expecting it to take her to the plane.

The video shows the unidentified woman stepping onto the scales and politely waiting for luggage to pass her on the conveyor belt.

She then steps on the belt, quickly falling flat on her backside.

The two check-in assistants jump to their feet and bring the conveyor belt to a halt.

It is unknown whether the woman injured herself in the mishap, but from the video it looks like it was mostly her pride was bruised.

Hanna - July 16, 2019 @ 10:32
We need to make a page where all of these WTF incidents are gathered in one place. Sigh.
The other day I told a client that the airline he wanted to fly with was still on strike and that I didn't suggest he book it until they return to biz. He then proceeded to ask -- "If I book on Expedia will I THEN be able to fly them?"