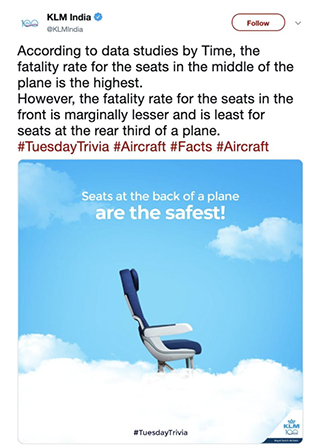 KLM is an airline leader when it comes to social media. It has won many awards for its innovative engagement. But a series of controversial posts have shown that social media notoriety can come with a cost.

First there was the launch of a campaign called "Fly Responsibly" in which the airline made a surprising request of its customers: fly less.

"Do you always have to meet face-to-face?" the promotional video asks. "Could you take the train instead?"

The next incident came after a woman complained on social media that a flight attendant asked her to cover up when she was breastfeeding her baby. KLM’s response was that the flight attendant was following company policy:

“Breastfeeding is permitted at KLM flights. However, to ensure that all our passengers of all backgrounds feel comfortable on board, we may request a mother to cover herself while breastfeeding, should other passengers be offended by this.”

Women’s rights campaigners reacted angrily to this response, saying the company was playing into stigma and mothers should never be shamed for feeding their children.

But the third incident that came this week was perhaps the strangest of all. It came in a Tweet from KLM’s Indian operation:

The post included hashtags #TuesdayTrivia #Aircraft #Facts and #Aircraft and was accompanied a photo of a single airplane seat suspended in the clouds with the words "Seats at the back of the plane are the safest!"

The tweet was later deleted and an apology issued: "We would like to sincerely apologize for a recent update. The post was based on a publicly available aviation fact, and isn't a @KLM opinion. It was never our intention to hurt anyone's sentiments. The post has since been deleted."

Of course, nothing is ever really deleted in the Twitter world, and screenshots have been posted on news sites around the world.

A KLM spokesperson acknowledge the whirlwind of bad press and stated: “We will be reviewing our Twitter protocol to better ensure appropriate content."