Pax Operates Plane TV With His Feet, Disgusts The Internet 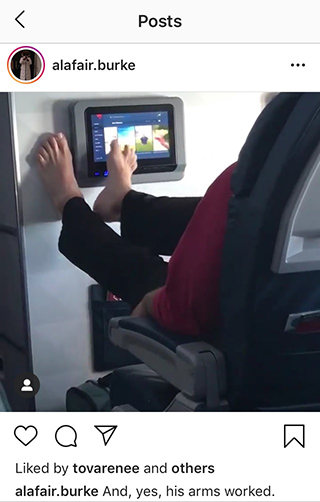 Another passenger has horrified the Twitter-sphere with eccentric behaviour on a plane… this time, by operating a plane TV with his foot.

American novelist Alafair Burke shared video footage showing the man resting his bare feet on the panel in front of him and scrolling the touch screen with his toes.

"My friend who doesn’t have Twitter sent this from her flight. It belongs on Twitter," she wrote alongside the video.

Many people were so horrified by the footage, that they even cut supermodel Naomi Campbell some slack over her extensive plane sanitizing routine, which she recently revealed in a YouTube video, that involves putting on gloves and wiping down every surface that she may touch throughout her flight.

Where's that blunt four-year-old boy who called out a passenger resting her feet on his armrest when you need him?