Instagrammers Fall In Love With Another Toxic Waste Dump 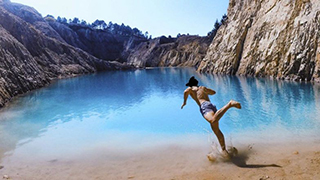 Instagrammers have latched on to a new beauty spot, turning up in droves to pose at a tantalizing, turquoise Spanish lake.

But unbeknownst to many happy snappers, the lovely lake is not in fact a natural marvel, but rather a toxic dump.

Monte Neme, in the northwestern coastal region of Carballo, is the remains of a Second World War-era tungsten mine and the azure hue of the water is the result of chemical contamination.

Dubbed the 'Galician Chernobyl,' it has proved hazardous to those who have swum in it, with one Instagram 'influencer' telling Spanish news outlet Publico that she had suffered vomiting and a rash that persisted for two weeks after she took a dip.

"Congratulations for bathing in a raft of highly toxic waste in a wolfram mine; without a doubt, Darwin would be proud of you," one follower commented on her photo.

According to the publication, "more than one has had to be hospitalized for damage to the skin and digestive system," which is certainly unfortunate for those unaware of Monte Neme's toxicity.

But troublingly, it doesn't seem to be dissuading those in the know, with Publico citing one Instagrammer called Uxía, who apparently stated that her rash was "a little bad, yes, but the picture was worth it."

The mine extraction of wolfram, an iron manganese tungstate mineral used to craft light bulb filament, began during the First World War. It was one of the only places in Europe Germany could harvest it, and for a while became the area's key economic hub. But it fell into decline in the Post-War period and closed for good in the 1980s.

As we noted here on Open Jaw recently, Monte Neme isn't the only unusually attractive industrial wasteland to be drawing tourists. Russia has a lake dubbed (misleadingly) the 'Siberian Seychelles,' bright turquoise in colour and surrounded by white sand.

Its real name, translated into English, is Lake Ash Dump, and it receives run-off waste from a nearby coal-fired power station. Its vivid colour is due to dissolved calcium salts and other metal oxides in the water, which is highly alkaline.