Two-Year-Old Injured At ATL After Jumping On Baggage Belt 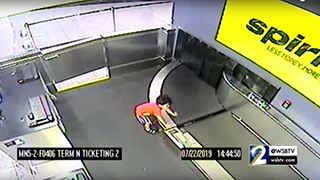 You can’t look away for a second.

Edith Vega set her 2-year-old son Lorenzo down as she printed a boarding pass at Hartsfield-Jackson Atlanta International Airport. Within seconds he had jumped on a baggage conveyor belt that landed him in a luggage room.

Startling video of the incident can be seen here.

“When I tried to go after him, it was at the end of the machine,” said the boy’s mother, Edith Vega. “I couldn’t even catch up... I wanted to jump in and try to go get him, but they didn’t allow me. I was just freaking out.”

An Atlanta police report says a TSA worker alerted authorities after finding Lorenzo in the bag room with a broken right hand.

"Officers with Atlanta Police and Atlanta Fire and Rescue responded to an incident at Hartsfield-Jackson Atlanta International Airport Monday afternoon involving a small child who accessed the automated baggage screening system via the Spirit Airlines ticket counter," the airport saidin a statement.