Movies On The Tarmac: VNO Turned Into Drive-In Cinema 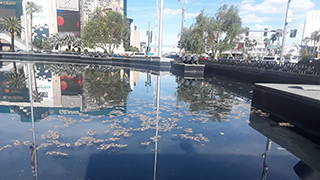 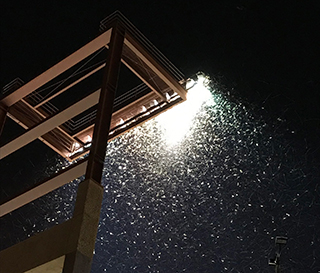 Bringing to mind one of the 10 Plagues of Egypt, swarms of grasshoppers have descended on Sin City, disrupting weather radars, deterring tourists and invoking hysteria on social media.

The clouds of buzzing insects were big enough that the National Weather Service detected them on its radar.

Scientists say the grasshoppers are migrating through the Las Vegas Valley as the result of a wetter-than-normal winter. Such migrations occur every few years and the insects are not dangerous, says state entomologist Jeff Knight.

Attracted to UV light, the insects have been flocking to the city’s brightly lit Las Vegas Strip. The Luxor Sky Beam, a pillar of light that rises from the Luxor Hotel, has attracted huge swarms at night, according to videos posted to Twitter.

To appear less alluring to the locusts, The Best Western Plus Casino Royale on the Strip shut off its lights on Friday and Saturday to avoid attracting the bugs, the Las Vegas Review-Journal reported.

Trending under the hashtag #GrasshopperInvasion2019 on Twitter, has garnered expressions of disgust and photos of horror, showing pools replete with drowned little grasshopper bodies, or flocking around street lamps.

“This is the wildest thing in nature I’ve ever seen,” one resident, Caitlin Sparks, wrote on Twitter on Sunday, posting a photograph of a street lamp illuminating a night sky filled with grasshoppers.