Missile Launcher As Souvenir Probably Not The Best Idea 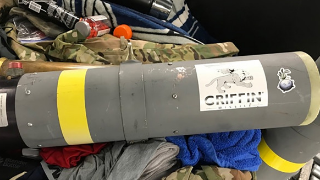 U.S. Transportation Security Administration agents are used to finding strange and alarming objects in travellers' luggage, like snakes, switchblades and human skulls. The latest addition to that list: a missile launcher.

Agents at Baltimore/Washington International Thurgood Marshall Airport made the discovery Monday in the checked bag of a man who was coming back from Kuwait.

The TSA says the traveller was quickly questioned. He turned out to be a member of the military heading home to Jacksonville, Texas. He told them he wanted an unusual souvenir from his time in the Middle East.

Fortunately, the device was not active.

TSA spokeswoman Lisa Farbstein joked on Twitter that "Perhaps he should have picked up a keychain instead!"

At least he would still have the key chain -- the TSA notes that "Military weapons are not permitted in checked or carry-on bags." The missile launcher was given to the state fire marshal for disposal, and the man was released in time to catch his flight.