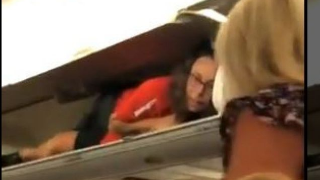 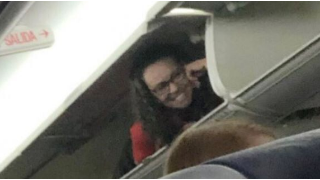 The overhead bins are full to bursting on most aircraft these days. But pax on a recent Southwest Airlines flight were perplexed as they boarded and found one overhead luggage compartment already filled – with a flight attendant.

According to a short video taken by passenger Veronica Lloyd, who was heading home to Pennsylvania from Nashville, the attendant can be seen resting on her side and stomach, with her feet hanging out of the compartment. While passengers are boarding, the airline employee rolls over on her stomach and seems to start talking, though the video cuts off.

Lloyd told Fox News she was “perplexed” by the woman’s actions and notes she was in the overhead bin “for a solid 10 minutes.”

“It was very interesting,” Lloyd said. “I think she was doing it to try and be funny and make the passengers laugh.” Lloyd said that when the woman came down from the bin she was very nice for the remainder of the flight.

Southwest said in a statement to Fox News that its employees are known for their sense of humour.

“Southwest employees are known for demonstrating their sense of humour and unique personalities. In this instance, one of our Flight Attendants attempted to have a brief moment of fun with customers during boarding. Of course, this is not our normal procedure, and Southwest crews always maintain safety as their top priority."

It’s probably a good thing the attendant climbed down from her perch before someone started trying to jam an oversized carry-on in there with her.