Finders Keepers: Teacher Finds A 2.12-Carat Diamond While On Vacation 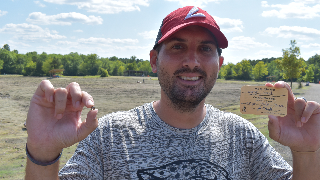 Sometimes, a location's name says a lot about what you can find there. Glacier National Park, for example, has 25 active mountain glaciers and the highlight of Arizona's Grand Canyon National Park is the layered strata of its deep gorges.

So what can you expect to find at a park called "Crater of Diamonds"?

A Nebraska teacher was lucky enough to find out when he made a glittering discovery.

Josh Lanik, 36, and his family were visiting the Crater of Diamonds State Park in Murfreesboro, Arkansas after learning about it from a coworker.

After spending about two hours searching for diamonds in the park, which has a "finders keepers" policy, Lanik spotted a jelly-bean-sized, brandy-coloured stone.

"It was blatantly obvious there was something different about it," he said, according to a press release from the park on Monday. "I saw the shine, and when I picked it up and rolled it in my hand, I noticed there weren't any sharp edges."

He put the gem in his bag, alongside other stones he’d found, and didn’t think much else of it… Until he discovered what he’d unearthed.

Before leaving the park, the family stopped by the Diamond Discovery Center to have their finds identified. After examining and weighing the gem, park staff brought Lanik into the office and informed him that he had discovered a 2.12-carat diamond, the largest one found at the Crater of Diamonds State Park in 2019.